Bretonnia, could it work?

I’m going to continue playing along with this dream of The Red Plague expansion, for a start it’s an interesting topic and even if these rumours turn out to be a load of old bollocks (which is a distinct possibility), at some point WAR will get an expansion. When that expansion arrives it’s extremely likely that we’ll see Skaven as a playable race. I know I would love to see them in-game and as discussion on the various WAR forums, etc has shown over the last two years I’m not alone in that respect. Also they have a wonderful selection of careers just waiting to be created, it’s an absolute no-brainer and Mythic would be spolit for choice. So assuming the Red Plague was a real expansion that introduces Skaven for the forces of Destruction, what would Order get in return?

That’s an easy question, as the context of the Red Plague itself defines the answer. It has to be either Wood Elves or Bretonnians. I’m not going to talk about Wood Elves today as over at Blurring Shock you can find an excellent post with ideas for what careers the Wood Elves could introduce to WAR. I would consider doing things slightly differently perhaps, well… perhaps anyway. Just like Skaven, the Wood Elves are a race that has multiple options for WAR style careers. Anyways, today I’ll post some thoughts on what careers the Bretonnians could have. In my previous post Grukkzag commented that he couldn’t see how Brettonians could be made to fit in, but I think there are ways, with a little tinkering anyway… First though there is one big problem to deal with, in both the warhammer lore and the tabletop game the Bretonnians are built around mounted Knights. They are essentially a cavalry army with limited infantry support. In WAR there is no mounted combat and it is extremely unlikely there ever will be for a wide range of reasons, so if we get Bretonnians they will be fighting on foot. You could try to imagine some clever background reason for this, or you just ignore it, make the careers totally kick arse and awesome looking and don’t worry about it. I’m all for the latter of those two options. Dressing it up would probably just sound stupid. 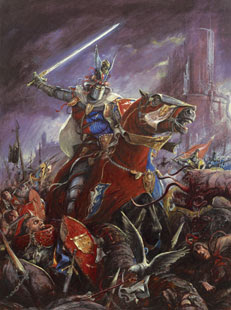 The second big thing to get round is the perception that Bretonnians are all about Knights and Damsels, which limits career options too much. I’d actually like to challenge that perception, because I don’t think it’s true anymore. The current Bretonnian book puts a lot of emphasis on the class divide in Bretonnian society and how this is reflected in the army itself. Yes there are a lot of Knights, but there are also things like Men at Arms, Peasant Bowman (based upon Enligsh Longbowmen who as history demonstrated were not to be underestimated), Yeoman and Battle Pilgrims. Those units also often have champions, champions that could be taken a bit further perhaps… Keep in mind this kind of tinkering is why the Disciple of Khaine career exists in WAR and not on the tabletop.
I’m not going to spend ages going into the detail of how I would make the actual careers work, that’ll turn this post into a monster :P So instead here are some basic themes from characters and troop types already in the existing lore:


Paladin (Tank)
This is not your WoW style Paladin, full of magic and holy smiting blah blah blah. This is a proper warrior. A Bretonnian Paladin is national hero admired amongst a nation of heroes, a shining example of chivalry and hard as bloody nails too. Covered from head to toe in the finest plate-mail armour and wielding a range of weapons, these Knights are some of the old world’s most elite warriors. The career would have brutal melee abilities and some kind of other abilities based around their religious purity and the vows they take. Also I would have them using Morning Stars, Flails and Maces, as I don’t think anyone really uses those in WAR currently and Bretonnians are rather fond of Morning Stars in particular. 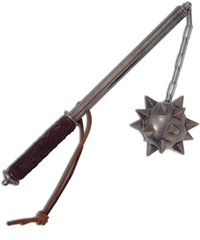 Morning Star - if you build it they will come.

Knight Errant (MDPS)
Young Knights trying to prove themselves and become Knights of the Realm. Also known as arrogant, obnoxious and very posh psychopaths. Give them medium armour, lots of weapons, abilities that reflect their unhinged nature and I’m sure us players could provide the psychosis. 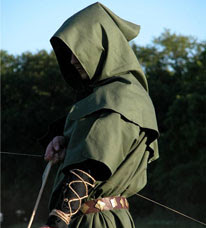 Bretonnian longbowmen are led by dubious characters know as Villeins. Why not expand that character a bit? A peasant he maybe, but this guy has fought tooth and nail to escape his lowly birth. Deadly at range with his longbow, but devious and tricky up close. Dirty tricks are the order of the day, anything goes if it gives him an advantage. Dirt in their eyes, kicks in the balls, hidden weapons, poisons, the works.
Damsel (Healer)

In Bretonnia you’ve got two types of damsels; the ones in distress and the ones causing it. Obviously we’re talking about the latter. They are spellcasters with magic using the lores of beasts and life, perfect for a hybrid pet and healing class. Pets being this like summoned wolves, bears and the like.

Now those are not the only options, whilst I was looking at the Bretonnian book I had other ideas for things like a Master of Arms, Battle Pilgrims and Questing Knights. So I think it is perfectly doable, should Mythic ever choose to do so. I’d still prefer Wood Elves overall, but I’d roll a Villein on Karak-Azgal tomorrow if they existed :D
Posted by Bootae at 19:09