Over the last week or so fate conspired to buff the crap out of my spare time. Due to a variety of real life issues I ended up with a truckload of time to myself and being the red blooded male that I am, I just couldn’t stop myself from revelling in whores, booze, a gigantic pile of Columbian marching powder and a rather awkward encounter with an aroused badger, in lederhosen.


Or perhaps not… In somewhat less dramatic fashion, what actually happened was old age and sensibilities kicked in and I instead spent the time watching boxing (a job well done Mr Haye!), football (Rafa wtf did you sub Torres for???) and OMFG SHOCK HORROR!, I played a lot of computer games…
This included getting my Zealot to level 21, my Squig Herder to 34, gained a smattering of renown on other characters and also acquired some nice new armour for my Magus. Not much new there, but the Zealot was a real surprise for me to be honest. I’d left him ages ago at a mere level 8 after I received a mouth full of bad tasting gunk (reminds me of a French lass I met once). I just didn’t get into it at all. Then last week on a whim I decided to get a couple more levels and with a loud “CLICK!” everything fell into place. I now officially like Zealots. It’s an interesting class and has a lot more potential for hybrid play than I had previously realised. My current alt-oholic plan is to level my Squig Herder to 40, closely followed by the Zealot.
The other big event of the weekend for me was, and I can’t believe I’m about to say this; I started playing Dark Age of Camelot again. Yup, back to the old school. A few days back a bunch of my mates started playing the free trial on the US servers, oh how I chuckled when I heard… The fools, the rose tinted fooooooooools! And then it happened, whilst chatting to them on vent, I got curious. Doh. Curiosity leads to consideration, consideration leads to interest and interest leads to downloading a free trial client, rolling a Midgard Hunter and getting some levelling (or should I say leeching) done. 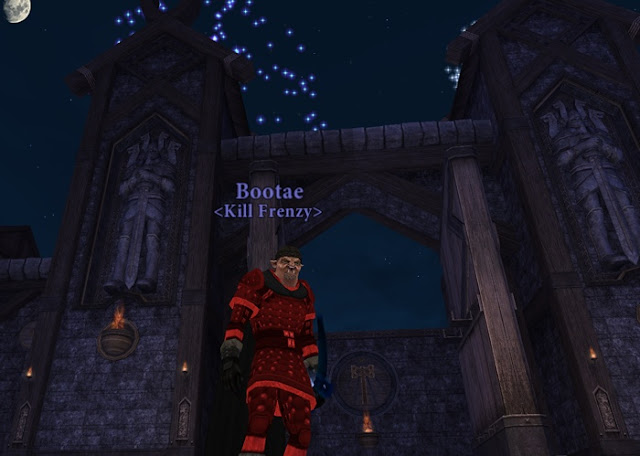 Playing DAoC again has been fascinating. There is so much about the game that is incredibly obtuse, annoying and downright dated; yet at the same time it still has so many wonderful things to teach modern MMOs and in particular WAR. Which is a little ironic considering both WAR and DAoC are Mythic games. The detail of those things is a topic for another post, something I’ll think about writing depending on how much I play DAoC, but there is one big over all concept, feeling, sense, thingy that WAR really needs to pick up.
SIZE! 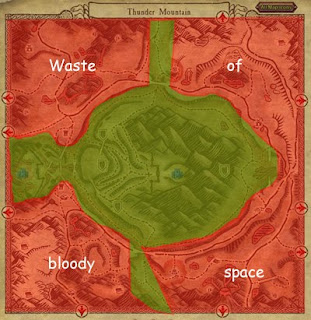 DAoC feels huge, open and monstrous. It feels like you are let loose in a massive wild world, a place where you can actually adventure. This is not because of the expansions and added content expanding the game, but due to a wide range of factors and not just the way its zones are made. DAoC has since launch just seemed “big”. Where as WAR feels enclosed and restricted. Regardless of the zones actual size, the way WAR funnels us into small areas and has huge chunks of irrelevant and unused landscape, it constricts the game’s sense of scale. As I said before there are a lot of factors that contribute to this different feeling of scale, it’s a lot more than just how the zones are designed and again this is something I may go into more detail about another time. What I will say though is whilst it is probably too late for WAR to address a lot of those factors, it is not beyond the realms of possibility to greatly improve WAR’s sense of scale. Mythic could work some magic, if they felt so inclined anyway. Here’s a thought…
West Praag! What’s the point of it? Once visited by a group of tourists in 2008, the area is now completely without life. So why not turn RvR on, change some of the existing terrain into objectives of some form (that influence the overall Praag zone locking) and pow! You’ve dramatically expanded the main Praag RvR area, added life to a dead zone and reinvigorate the main part of the Empire/Chaos campaign. Why not, my Mythical friends, why not just try it? Just this one zone, try it out see what happens, you could always turn it back if its fails. And what is the worst that could happen? A completely unused area gets visited.

Regardless of if that idea is shite or not, I would highly recommend that Mythic give serious consideration to this feeling of scale. It’s something that DAoC has so right, yet WAR could do so much more with.
Posted by Bootae at 16:46