One of the things I asked Andy about while having drinks after Gamesday UK was about the new siege weapons, my question specifically was would we be getting siege towers and/or ladders? The answer (paraphrased) was not in 1.4 & RvR Pack and whilst that of course doesn’t mean never ever, certainly not in the immediate future. Now, I really want to see those brought in one day, but I guess that with 1.4 the role those weapons would have provided will actually be met in game by Rat Ogres, Gutter Runners and the Aerial Siege weapons.

The role is providing attackers with multiple access points into a keep, which in turn provides the defenders with more things to defend and gives everyone more to do than huddle round a single doorway. It’s all about spreading people around and making keep battles more dynamic. 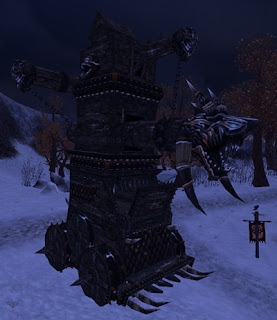 With the future changes:
1- Rat Ogres can throw allies onto the walls.
2- Gutter Runners can leap onto the walls.
3- Aerial siege weapons can parachute players into the keep

That’s three new ways of getting inside, so in effect we are getting the impact that introducing siege towers or ladders would have made. Combine this with the removal of fixed siege pads, which means attackers being able to place siege weapons where ever they like, and you can start to see how an organised attack could focus an attack on a particular side of the keep, or even multiple areas at once.

So like I said at the start of this, whilst I still want to see siege towers, now it’s only for the look and feel of them, because it would appear the associated gameplay enhancement IS going to happen.

PTS in October is going to be bloody fascinating to see how this all play out.
Posted by Bootae at 11:31