With the Wild Hunt live event the Hunter’s Vale dungeon is once again available in Tier 4. Normally the dungeon is only accessible for Tier 1 characters and I’ve not been in there myself since the last Wild Hunt event a year or so ago. I’ve been in a couple of times this week and I have to say that I think this is probably the best dungeon in WAR. In fact if more were like this then I’d be saying PvE in WAR was pretty damn good, but they’re not and it isn’t. Don’t get me wrong, the PvE in WAR is not terrible (as some make out), but it’s not great and is far too glitchy with it's (at times) over complicated bosses and pathing issues. However, Hunter’s Vale is a very noticeable exception and is utterly spot on.

For a start it takes no more than 30 minutes to clear, which in my book is ruddy marvellous. I like a bit of PvE now and again, but I don’t like being stuck in a dungeon for 4 hours. Faster dungeons just put less time pressure on people in so many ways; it’s no big deal if someone has to AFK, less hassle if things go wrong, its less of a rush organising it and is also a lot less of a pain in the arse to fit around real life. So for me, while I do still enjoy big dungeons, given the option, I would much rather have a wider range of short but sweet dungeon instances to choose from. 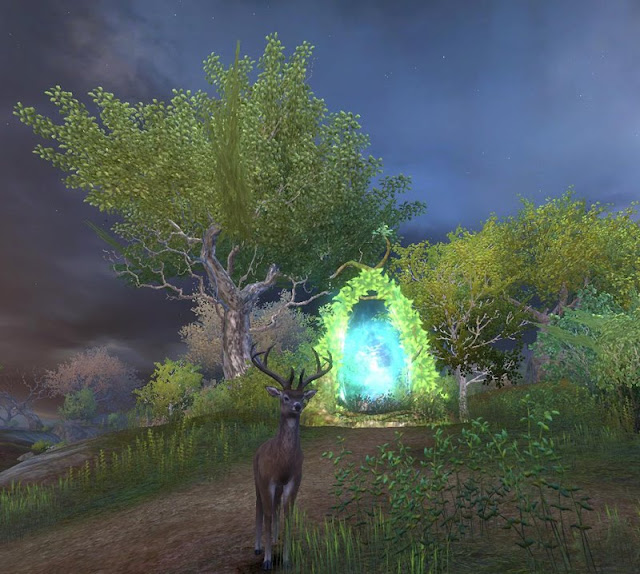 The boss fights in Hunter’s Vale all have something a little different. They’re certainly not complicated and compared with Tomb of the Vulture Lord they are rather basic, but neither are they all pure tank and spanks. And that’s fine with me. I don’t want to explain tactics for 15 minutes each boss whenever anyone is new to the dungeon, its dull and just time wasting. I hated it in WoW and, well everything bloody well else too. Also in general terms it seems like the more complicated a boss fight is made, the more random, luck or specific class based it becomes. Hunter’s Vale avoids all of this crap and each fight is a quick explain with just the odd thing here and there to watch out for. Perfect.

Visually it’s just so on the money. It’s a really nicely themed and designed dungeon, that despite actually being very linear, it somehow feels a bit wild and larger than it actually is. I particularly like with both Hunter’s and the Lost Vale instances that Mythic have moved well away from the traditional underground or inside building dungeons that so much of WAR and other game features. Actually that’s something I liked about Age of Conan, it has some great looking outdoor “dungeons”.

Mythic for the foreseeable future are very much focussed on RvR and I think that’s a good thing, WAR’s strongest point is that RvR after all, but if Mythic decide to do more PvE one day (which they no doubt will) I would like them to consider Hunter’s Vale as the template. I really do think it’s the best PvE instance in WAR.

PS: The Land of the Dead Lairs are also good examples of decent short burst PvE. I wouldn’t complain about more instanced Lairs either, one day anyway…
Posted by Bootae at 00:54