It's been one hell of a crazy weekend on Karak Norn. The double renown for WAR's 2nd birthday party has brought people out in absolutely massive numbers, I've been on the painful end of (confirmed by keep guards) 10+ Order warbands a few times. But it's not been one way traffic, there's also been huge amounts of Destro in action too. Some of the fighting in Praag was just epic, giant sprawling melees covering the ENTIRE Martyrs Square area and stretching into all the side roads at once. Great fun and the game has run pretty well throughout, with the exception of one utterly insane night in Chaos Wastes where the entire server squeezed into one zone. 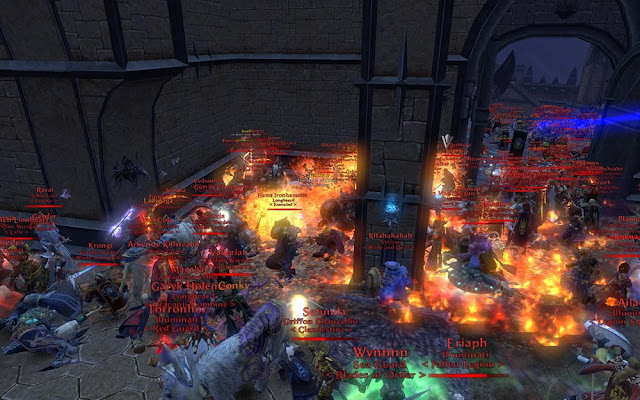 The renown and almost constant AAO meant I jumped my Chosen up two renown ranks to 76 this weekend and I also hit 40 on the Black Orc, bringing me to a total of 8 level 40 characters on Karak Norn. Of course some people think I'm bonkers, but I just think I'm free and enjoying the diversity those alts bring me. That said, I will be continuing to focus a bit more on my Chosen for the forseeable future and finally getting round to hitting 80. At least that's today's thought.

Mythic said the renown weekend bonuss was to kick off the 2nd birthday celebration, which suggests there's more to come, so I wonder what else we'll be seeing? Probably a couple of items I suppose, hopefully something useful ;)
Posted by Bootae at 00:27