We had a shockingly bad time in RvR this evening, in part due to the odd screw up by us, but mainly due to over half my warband suffering from incredibly bad lag. Players were appearing to teleport around and there was a regular occurrence of that old favourite; the classic lag spike pause. This combined with a very zergy night in every racial pairing (just soooo many people online tonight) was obviously pissing people off and we haemorrhaged players as they (quite sensibly) decided to go do something else. Nobody likes getting rolled by superior numbers AND lag. So I decided to do a little bit of Blorcing. 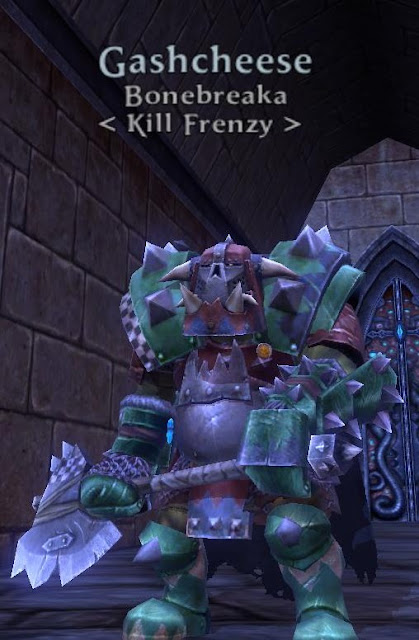 Off to Land of the Dead I went and then it was the usual stuff, grindy grind grind! Ran out of rest XP just after I dinged level 37, so I’ve left it there for now and will continue soon as I have a full level’s worth built up again. Which means I've only 2 levels more grinding and then I’ll use a war tract item for the free ding to bypass 39-40. It’s nice to have the end in sight and I’m quite looking forward to swinging that great weapon about in Tier 4 properly.
Actually I’m considering not doing any PvE with this character at 40, instead sticking with a Great Weapon and just going for RvR & scenario items. Of course it’s easy to say that now… We’ll see ;)
Posted by Bootae at 00:24