I’m sure people won’t be shocked to hear that I spent the weekend playing the RIFT beta. It seems like pretty much every other gamer I know did too. And it was, once again, abso-bloody-lutely great. The PvE was entertaining throughout, the PvP dramatic and enjoyable and the world itself was a pleasure to be in. This is one great looking game and my initial concerns about the art direction have been completely washed away.

For a game that is essentially not doing much new I’ve been surprised at quite how RIFT feels like a breath of fresh air, particularly once you get above level 15 or so and things really start to kick off. I think that fresh sensation is down to 3 main things.

Rifts and Invasions
With Rifts appearing anywhere at any point and then spawning invasions that rampage across the zones, they add a random element to MMORPG gaming that has been missing for a good while. You can be doing your questing, PvP roaming or whatever, everything is normal MMO fare and then all of a sudden all hell breaks loose and you’ve suddenly got an entirely new situation to deal with. Rifts and Invasions add a level of uncertainty and break up the standard predictable gameplay that we’ve got used to in MMOs. People are actually grouping up with strangers to deal with stuff.


A major zone wide by the forces of Death in Freemarch 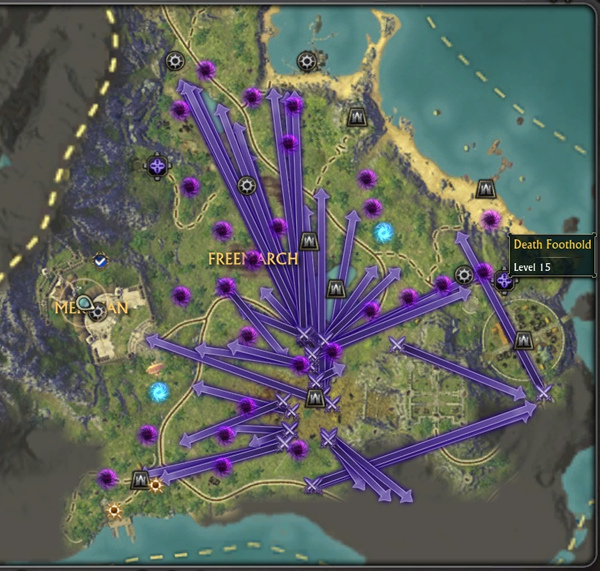 I think since Warcraft that MMO PvE gaming has been incredibly dumbed down, when talking about the open world experience that is. It’s always predictable and straightforward. No matter what you’re doing you know what will happen. If you ever repeat a quest on an alt it will be identical to the time before. Not necessarily so with RIFT. If playing on a PvP server (obviously you should be :P ) not only do you as normal have enemy players to be on guard for, but you (and they) must also be ready for attack from Rifts and Invasions. And the different Rift factions will also fight each other and the mobs in the zone. So what may start as a standard PvE moment can be transformed into a 3, 4 or even 5 way fight. It really can be wonderfully chaotic.

This in turn also applies just as much to openworld PvP, you’re fighting enemy players, but who knows what nastiness might happen. It is a very aggressive game in that regard. I’ve said it before but people should always remember that DAoC is a PvP/PvE hybrid. Whenever you’re doing PvP, there is PvE around you and for a lot of the game there is the same in reverse. DAoC is NOT a PvP or PvE game, it is not a RvR game, it is ALL of those combined. Which is something Mythic need to think about with the new purely RvR focus in WAR. Go take a long hard look at DAoC and understand the myriad of reasons why we hold that game is such high esteem.

Trion have gone and done a Blizzard special
Just like Blizzard did with World of Warcraft they’ve looked at the features in other MMOs, stolen the good ones or those with potential and then improved them or at least ensured they work. Other than the soul system, RIFT does not do much that is completely new. It’s comfortably familiar and not particularly innovative, I suppose you could say like almost every MMO released since 1999 it’s just Everquest again. 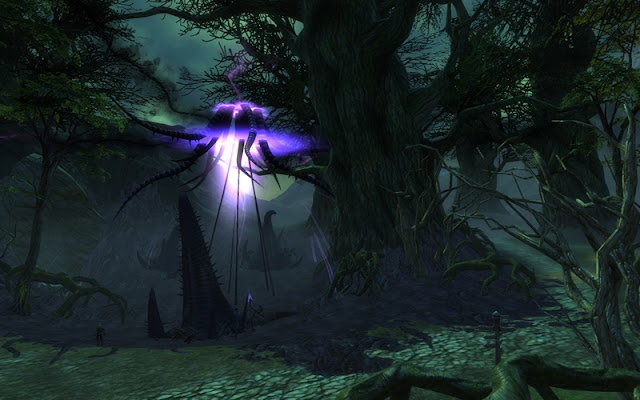 Yet it still feels fresh because everything just seems to work and work well too. From the crafting that is actually worth doing, to the WAR style Warfronts, to the wide variety of ways you can gear up and so on. For example; Rifts and Invasions are a hybrid of the public quests from WAR and Tabula Rasa’s dynamic battlefields. They’ve evolved the concepts and actually made something decent. It’s not a new idea; it’s just this time it works.

It's like applying the concepts in Bruce Lee's Tao of Jeet Kune Do to an MMO :P


I’m pissed off and a bit jaded
There’s no escaping the purely personal impact of WAR’s recent changes. It’s seriously pissed me off because it is just not the same game anymore. It can be redeemed, but until Mythic get rid of the ridiculous level 41-43 boost, the increased stat caps and insane stats on the RR90-100 armour I can only consider WAR’s PvP as totally broken. It has all gone too far. People claim you can level 40-80 in a week and still maintain a real life, but they are either liars or have absolutely no perception of how much they actually play. Of course the people running round instant killing people don’t see any issues, everyone else is just a whiner :P And regardless of getting to 80, it’s still gone to crap when you look at the difference between 80 and 90+.

Plus the super zergy campaign we see with double 4+ star keeps is just not much fun. I did ask in the Mythic live Q&A prior to 1.4 if keeps would degrade if the supply lines from BOs was not maintained, Mythic seemed surprised at the question and said no.

I did a tomb the other day, Tomb of the Moon I believe is the name; a one room, one boss and just 2 adds PvE instance. The adds bugged three times with the auras not appearing (yes we all has gfx set corectly) and then on the fourth time as we entered the instance, our DoK was for some reason put into a different instance to the rest of us. We gave up. A one room, one boss PvE instance should not be bugged like that. I've done 3 dungeons in RIFT so far and they have all been flawless, in a beta test, flawless.

Unfortunately pretty much everyone I know is feeling the same way about WAR.

So while I really like RIFT, I am also aware that I am incredibly disappointed with where WAR is right now and that can make anything different feel refreshing. Particularly if that other game is incredibly polished, runs well and has interesting new things to look at…  Yet maybe RIFT isn't as good as it seems? I'm obviously biased by how annoyed at WAR I am. Objectivity doesn't mix well with irritation.

Now it may well turn out that long term RIFT isn’t for me, perhaps invasions will get old, or the end game and PvP won’t live up to expectations. Who can tell? But I am starting to think that I will be taking more of a break from WAR than originally planned while I give RIFT a good shot. I’ll still be keeping my WAR account active, writing about the game and will mooch about on it a bit, but once RIFT comes out I doubt I will be playing WAR on anywhere near such a regular basis. At least for a month or two anyway, after that, who knows? It really depends on Mythic and what they do, or don’t do. Perhaps RIFT will just be a nice distraction while my frustrations with WAR simmer down and Mythic do a phoenix from the flames. Or perhaps not, we’ll have to wait and see.

In the meantime, I can’t wait to get properly started in RIFT. BTW I decided on class. I'm going Rogue and will be mainly messing around with a Riftstalker... I'll post why I've been captivated by that particular soul another time. 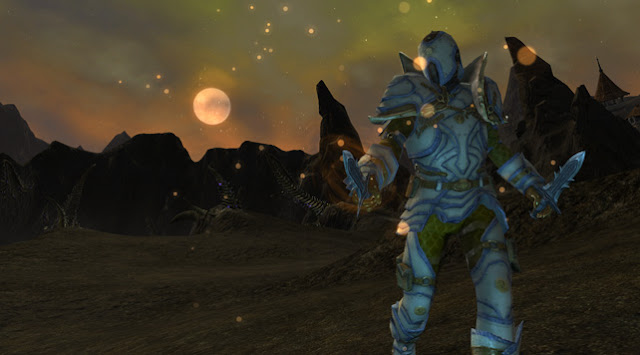