Thanquol, you are a sodding tosser 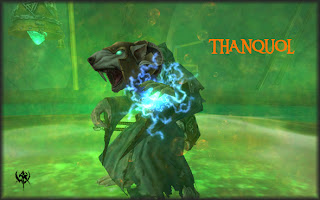 AAAGHH screw you Thanquol and your poxy incursion! Despite our group having people in the top damage done, none of us are getting even a chance to roll on loot as it says we didn't contribute enough. First two bosses just now, same thing and we've logged off. Third bloody time this has happened to me in TI and it's annoying as hell.
Man this dungeon thing needs work. Barely any Skaven in it, barely any enemy players in it (or other times far too many), barely anything to do in it and all told, just hugely disappointing. For me it’s the biggest let down with 1.4 and the RvR packs. Mythic have some changes in the pipeline for TI, but man oh man it needs to be more than just a few tweaks.

It needs to have:
Lots of potential, totally wasted right now. Chop chop folks, make it good please.
Posted by Bootae at 00:35