First off, the big 2 questions for me after trying out a new MMO…

Q) Is this a game that could compete with WAR for my “main MMO” title?
A) Definitely not.

Q) Is it interesting enough to be a secondary MMO, something to dabble with in my spare non-WAR time?
A) Yes.

I've been intrigued by Star Trek Online for a while. I'm no Trekkie, but I don't mind watching the TV shows and films, plus it's just one of those classic shows that people around my age grew up with. So while I don't speak Klingon or any of that madness, like most people I do know what the game's universe should feel like. Which is one of the things you instantly notice with STO, the Star Trek atmosphere is spot on. The classic Star Trek visual style has translated to Cryptic’s cartoony style very well, but the thing that’s really got me is the sound effects and music, both of which are great. Cryptic have nailed the Star Trek feel and for some people this will no doubt make up for the game’s shortcomings.

Like any Cryptic game the character creation system is second to none, no shock there, but you can also customise your ships. Had it allowed people to make ships that didn't fit the ST canon, it would have been a recipe for disaster, but thankfully it works fine and whatever you create will look just right.

Unlike EVE, you actually do get to properly control your ship, which if you compare them as space themed MMORPGs is one big score for STO. But comparisons between the games are unfair. EVE is a brilliant, incredibly deep and bloody harsh sandbox, the spiritual successor to Ultima Online in many ways, where as STO is a much more accessible, heavily instanced, PvE Carebear MMORPG. Which I say not as a criticism, just as a fact, the two games are apples and oranges. It’s like comparing Ultima Online (pre-Trammel) and World of Warcraft. Comparisons are pointless.

STO's space combat is a lot of fun and has a bit more to it than you may think. I like the whole balancing act of managing your shields, the switching power levels and positioning your ship correctly. Hell, I just like the damn sound of phasers. It's a lot of fun, extremely atmospheric and enough to make me want to log in, for now. 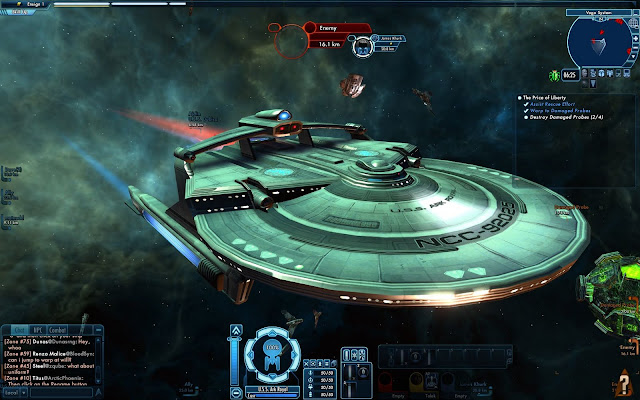 Ground missions are not so hot. They're not exactly bad, just a little dull at times and suffer from feeling very clunky. Characters don't move very smoothly and coming from WAR (which runs very well now) it was like walking through treacle. Also gun based combat seriously shows off the limitations of the traditional MMO NPC's AI. It's not so bad in a sword and sorcery game when NPCs run at you blindly waving swords, but it looks stupid when they still do it with a laser gun... On the positive side, the landscapes look great and so far have been very varied in appearance. I really hope the variety continues throughout the game. I’ve heard that the ground missions get a lot better once you get to the first big promotion (which is also where you get your first major ship upgrade), however I’m not convinced. One cool thing is you can solo ground missions and instead of other players you can take your bridge crew. That is a quality move.

Another thing I really do like is the way the "quest" text is presented. It's just the right amount of info and for the first time EVER I have actually read everything. The storylines flow nicely as you switch back and forth between your ship and various away team missions, be they planetside or inside other spaceships.

Another Cryptic thing, which I still don't like, is all the instancing. It negatively affects a players feeling of immersion into the game world. Thankfully in STO the whole going to warp thing combined with the game's ambiance limits this as an annoyance. I don’t like it, but I can live with it.

Character and ship progression shows a great deal of potential. The concept of not only managing your character’s skills, but also your bridge officers, is very interesting. There also appears to be a wide range of equipment upgrades for both your characters and your ships. To be honest though it's too early to judge how it will pan out at higher levels, certainly there’s potential.

Like Champions Online it’s a game that looks interesting short term, but I’m not convinced about it long term. I suspect it’s going to be another Cryptic grind fest. Even so, I will be buying it. Despite many annoyances (some of which I’ve not mentioned to save wall of texting too far…) I really enjoyed the atmosphere and the storylines. So I am going to play it, but primarily as a single player game and probably only occasionally group up. At the end of the day it will cost the same as buying a new single player game and having almost finished Company of Heroes, I need a new single player game :P
Posted by Bootae at 12:30