There and back again

City sieges are quite probably WAR’s weakest point. Which in my humble opinion makes it rather strange for Mythic to use the 1.3.2 patch to put such massive focus on them. Yes, city sieges are MUCH improved from their past (almost) pure PvE incarnation, but they’re still not exactly good.


Limited gameplay
The cities limit your gaming options far too much. Unless you’re there at the start of the siege, you’ll find yourself stuck with either PUGing the 48v48 instance (which is almost always a terrible experience), or having to log off for hours, because there’s simply nothing else to do. I’m sure we’ve all experienced the tedium of joining a guild warband that’s already inside a city and then having to sit outside alone for ages, all with the vain hope that a spot in the instance will become available… That’s not fun in anyway or form and I’m simply never doing it again, instead I’ll just log off and go to a lower tier, or play a different game. We need more things to do. Scenarios perhaps, so that if we do get online a bit too late and can’t get in our guild/alliance warbands, we will at least have a chance to do something.

The 3 BO capture, 48vs48 instance
Actually this first large scenario/PQ is quite good. The scenario’s simple objectives provide an entertaining and at times even tactical challenge. So why am I listing this as a problem? Well, continuing from the issue of limited gameplay, the problem is that it’s a bit shallow when it’s the only thing to do. The simplicity is great when you don’t do it often, since it lets you get straight into the action and it is fun, but as a regular event it lacks longevity. Same 2 cities, same 3 flags, every night… Familiarity plays the field a bit, then breeds with contempt, only to end up marrying boredom.

The stage 2 PvE raid content
It’s buggy and there’s a problem with the whole concept. As every MMO veteran knows; PvE raid bosses that require tactics to beat, also require practice and a united warband working together. On a competitive server like mine neither side gets to stage 2 often (plus the victory points are often bugged anyway), so the practice does not happen. Also because of the whole city instancing experience, by the time you get to stage 2 it’s very likely you will no longer have a full guild/alliance warband left online (if they got in with you at all). Sods law now decides that you end up with some random bastards who are determined to ruin everything.

Now Mythic, if by chance you read this, please do not see this as me saying we should get to the advanced stages of city sieges more often. We shouldn’t. It should be rare and be a big deal (more on that shortly). Likewise I don’t think the raid itself should be dumbed down. It should be challenging, but it needs to be fair, it needs to be something realistic for people that don’t farm the instance every night. Is that careful balance too much to ask for? Regardless, whatever happens it should be completely bug free. Getting to stage 2 and then have bugs ruin everything is utterly unacceptable. Plus any bugs in this part of the game are a sure way to generate bad feeling.

And further more, does it have to be PvE? When you look at all the buggy instances, PvE hasn’t exactly proven to be Mythic’s speciality. Maybe some sort of more interesting PvP based Public Quest would be better?

A while back zone locks became much easier, which was both good and bad. Then with this latest patch and the removal of forts, the game has taken a huge step towards all sense of drama being removed. City sieges are now the norm, something you’ll get to do multiple times a day, every single day…. Getting to a city used to be an achievement, a moment that actually meant something. Alas this is no longer the case and now the whole feel of the game has changed. A friend of mine summed it up well the other day when he said, “they’ve turned the campaign into a death match”.

He’s completely right. WAR needed changes and the forts were almost universally hated, but they did add a speed bump, something that gave the campaign at least a bit of longevity. Without them and with no change to the campaign’s core system, there are no stumbling blocks. A dominant faction becomes more so and more balanced servers turn into a game of table tennis. It’s kind of like the campaign isn’t really a campaign anymore. If you think about what you expect from the very word “campaign”, it implies something long term, something that requires planning, thought and effort. Unfortunately that doesn’t quite work when we ping pong back and forth through the ENTIRE campaign structure in an afternoon. All of the “epic” has gone.

Now this post may have seemed very negative, but I’m not trying to be, I’m just trying to be realistic. In their attempts to improve the campaign experience, Mythic have actually weakened the whole concept of it. This is most definitely not what I wanted, nor is it wanted by anybody else I’ve spoken to. Perhaps that’s because of the server we’re on, but seriously, who wants to play WARlite? 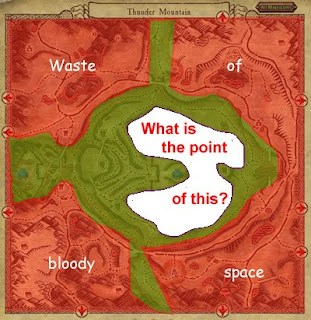 Having said all of that, perhaps Mythic aren’t a million miles away from something great. With some tinkering they could slow the pace right back down, add/change a few things to provide more variety and give us the “epic” we're missing (and add a third faction! HAH Got it in there!). The game today feels small and for me this is mainly down to the small RvR enabled areas and how we blast through them so damn quickly. As I’ve said before, I really think Mythic need to expand the size of the oRvR zones and stop wasting so much space. That’s probably quite a lot of work to do, but that doesn't mean it shouldn't be done and there are easier to implement short-term solutions in the meantime.

The easiest and most obvious is to make it so you have to lock all 3 pairings to access a city. This can still be quickly zerged through, but it would make it a little bit more difficult at least.

A more entertaining way would be to make all zones active at once. Allowing people to attack in different places and apply some more involved strategies and tactics. Each BO and Keep would be worth a certain amount of “control points”, if you want to lock a pairing you’ll need to capture 75% of those control points in that pairing… Now that’s more like it. In fact, I think I’d be happy with this. It could even lead into a system for reintroducing the other cities, hah!

In the end
I’m glad forts are gone, they sucked royally and I have to say that the decision to remove them is not the only factor in the watering down of WAR’s campaign, but it is a big contributing factor. I’m kind of surprised to find myself saying this, but I miss the days where locking a zone took hours and getting to the enemy city would take effort over many days. I don’t miss what we actually had to do to lock them, but I do miss the feeling of zone locking being an achievement. Actually, that’s not correct. I think I’m missing any feeling of achievement in WAR’s campaign. It’s just too damn quick. All too often lately when I log in, if we’re not already in a city, it’s only an hour or so before we are. And then, the moment a city becomes available, people start logging off.

It's a real shame because right now I'm really enjoying the combat in WAR, but the campaign is total meh.
Posted by Bootae at 16:25