Should Land of the Dead be open ALL the time? Or should it be this, or that...

"Should Land of the Dead be open ALL the time?" is a question that lots of people are asking.

At the moment the oRvR and scenario scene in vanilla Tier 4 zones has almost totally dried up. Zones are being locked without any enemy to kill, they're all off hitting skeletons. No surprise there, people were always going to want to spend time in Land of the Dead when it came out, there's a load of cool things to go see. 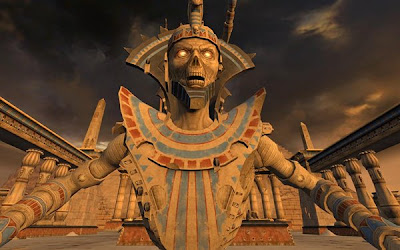 But how long until the novelty wears off?


Until it does, it looks like the vanilla Tier 4 campaign will remain a predominantly PvE experience and Land of the Dead has already proven to be as much (if not more) about PvE as it is PvP. Short dramatic bursts of PvP followed by PvE.


When undefended cities' star ratings plumment and players realise they're not gaining much renown in LotD, will they be naturally drawn back to fighting in the RvR lakes of Tier 4? I hope so, otherwise the current back and forth access to LotD could prove to be more of a hinderance to RvR than a reason for it. It will probably be a while before we see how this will work out, but should LotD prove to prevent RvR, then Mythic may have to consider leaving the gates open.

Ahhh... but then would that mean the PvE content would become utterly impossible due to constant attacks by the enemy? Would we have one giant clusterfuck of every player in one zone? Oh bugger...

It's all very easy for us bloggers and forum posters to criticise Mythic and come up with our own amazing solutions (something I'm obviously guilty of), but in reality evolving a live RvR themed MMO game to find that perfect balance between PvP and PvE must be a total nightmare. Maybe our ideas would work, but maybe they'd do even more damage and we're too naive to realise.

Not that knowing that will stop us thinking we know best. Just like when watching the football... I know that we should be playing a 4-4-2, why can't that twat of a manager see it? It's obvious.

Labels: Land of the Dead, RvR