Well then chaps, we’re a few days post launch of Lands of the Dead and now seems an appropriate time for a little review of how things have gone so far. Please note this is based on my experiences on Karak-Norn which is one of Europe’s busiest servers, but this may not be the experience of other people. More than in most MMOs your experience of WAR can vary dependent on server population.

A general note before I go off though, things would be working a LOT better IF GUILD CHAT BLOODY WORKED in LotD. Seriously guys, you hot fixed various little things and left that still broken? Sort that out pls :) Okies now I've got that shouty bit out of the way, onwards...

Has LotD delivered the RvR heaven we were promised?
No. In fact make that a resounding no, with a daemonic reverb effect and 100ft flaming letters. So far LotD has proven to be primarily a PvE experience with small bursts of RvR thrown in. Alongside that it has drained the tier 4 zones of players and I can no longer log in and RvR whenever I want. This is bad, really, really bad. Previously WAR was an RvR game with PvE as an alternative option, right now on my server it’s a PvE game with some RvR now and again.

If you are not currently subscribed to WAR then you might wondering how this expansion has basically stopped RvR, seeing as the key selling point for it was a thriller of a RvR zone. Basically what happens is… Order are in Land of the Dead, Destruction are on their own in the normal tier 4 zones. Destruction has to PvE lock zones to gain access to LotD. Due to the fact there’s very few (if any) Order to fight, this can take an hour or so. This also means you spend most of your time doing nothing, once you’ve claimed the Battle Objectives and Keeps you’re left just watching timers tick down. You can’t get any skirmish or scenario points, as there are no players to fight. Then when Destruction gets access to LotD they all rush over, quickly purge any Order that can be found and are then left with PvE in LotD. Order that got purged are then back in tier 4, it’s now their turn to PvE the zone locks and Destruction are PvEing. Annnnnd repeat…

This isn’t purely the design of LotD’s fault, it contributes of course, but more than anything it boils down to what players are choosing to do. Our greed for flashy new loot and something new wins through. People are choosing to be in Land of the Dead instances or buried away somewhere else PvEing amongst the desert sands. A lot of people are staying in Tomb of the Vulture Lord trying to beat it. They could of course decide to stay in tier 4 and fight each other, but whilst LotD is all new and shiney this hasn’t been happening and it won’t stop 'till people get enough. 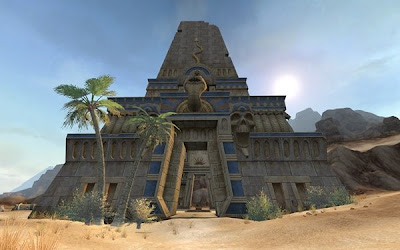 On the positive side there are signs that this is changing, Tier4 RvR is on the increase, but it needs to improve fast. Big name players are quitting, guilds are dying and even within my own guild I’m seeing people getting very negative about LotD. And it’s fair enough, most of us play WAR for RvR, if we wanted PvE we’d go elsewhere. The big question is will enough players decide to kick start the RvR campaign themselves, or will Mythic have to respond with something off the wall?

Is the RvR in Land of the Dead any good?
Yes. The RvR doesn’t last long because after being killed if you release it’s only the controlling side that will respawn within Land of the Dead. The other side respawns in their home city and are locked out. It’s all gone too soon. However the fighting within LotD can be great, particularly inside invaded instances. I remember the time we trapped some poor group of Order against a huge skeletal boss, then slowly cut them apart and another classic moment where I was alone against 5 Order as we desperately tried to shove each other into the swinging axe trap, the rest of my group stuck on the otherside could only try and keep me healed and cheer me on over ventrilo (it ended badly for me :P ).

There’s also been some very cool group/warband scale skirmishing. My guild tends to keep away from the zerg and this has led to some great run ins against Order doing the same thing. Seriously if you wanna be startin’ somethin’ then you need to get away from the zerg and hunt down people across the zone, it’s much more fun.

What about the Public Quests?
There’s a few that aint so hot, for example the jar collecting ones are dull, the carrion one is rather glitchy and the roaming PQ Ricci’s Raiders is a bloody myth, but the majority of them are a huge improvement over all the PQs we’ve seen in WAR so far. I’ve not got the names of them in front of me now, but I’ve quite enjoyed most and there’s several I really like. The one down south with the huge skeletal giant surrounded by scaffolding is very cool, as is the Simon Says combination game outside the Tomb of the Vulture Lord, though if you’ve got idiots there you can’t win. In general the PQs are well thought out, engaging and make mob grinding (which essentially is all that MMO PvE ever is) enjoyable. 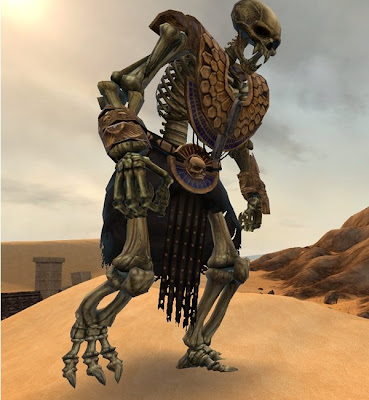 Lairs worth a visit?
It would seem so. Instanced lairs are the right way to go, I hope Mythic consider reviewing all other Lairs and making them instanced too. I’ve only done 2 so far and as such I can’t comment too much, though feedback I’ve heard has been very positive. From what I’ve seen myself so far I’ve been impressed with their design and think Mythic are on the right track with lairs here, but I’ve not been at all pleased with the buggy boss in the Tomb of the Sun. A one mob dungeon should not be bugged, this makes me want to scream.

So how was the Tomb of the Vulture Lord?
It’s great. This is the big instanced dungeon where Tyrant armour drops, the place with the infamous traps, enemy player invasions and difficult new bosses. I’m not going to say too much and spoil it for people, but from my experiences in there so far it has some excellent boss events and brilliant atmosphere. I love the traps; I’ve not had so much fun being frustrated by something in ages. Not since the wife decided to… uhm, in fact I’ll not go there. 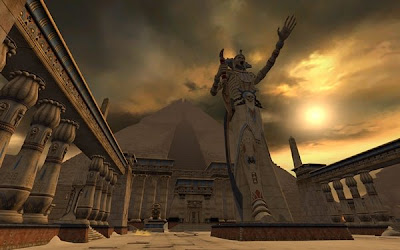 It does need a bit of work with invading, there seem to be a few bugs with the invasion PQ ending and the loot appearing at all, plus there can be a lot of waiting around if the enemy poke their head in and then just leave. Also for people that are more into PvE, with the invasions you may end up saying just leave me alone.

To summarise...
Land of the Dead is atmospheric, has great graphics and has made some big steps forward with WAR’s PvE. It brings us good new instances, easily accessible loot and a wide range of things to do. However it hasn’t yet revolutionised RvR and instead is having a negative effect on PvP across my (and other’s) server, but I’m hoping that will not be a long term issue. It seems like players are already filtering back to tier 4 for some more reliable fighting, but “seems” is not enough, it must happen. LotD should be a sideline, not the main game. The tier 4 campaign and the RvR within is the core of this game, if you’re out in tier 4 looking for a fight, then you need to know that you are not alone and that you can get a PvP fight when you want.

LotD is cool, but I don’t think it’s gone to plan for Mythic. It’s black or white really, we need regular and reliable RvR back or people’s copies of WAR will just go in the closet. But instead of it being down to Mythic to fix, perhaps this time its us as players that need to sort it. Time for us all to look at the man in the mirror.
Posted by Bootae at 17:37

Labels: Land of the Dead, RvR