MWO - Another mech revealed and it makes for a good comparison

And it's the Centurion; a 50 ton medium mech that typical has a rather mixed array of weapons. Medium Lasers, LRMs (Long range missiles) and a big old AC10 (Auto-cannon projectile weapon). Though with the Mechwarrior games typically immense customisation options and the many variants within the lore itself, the standard weapon load out probably won't mean a great deal. Whatever happens, this should be a reasonably quick and quite potent medium mech. This could be my new Uziel ;)

This particular mech is a really good example of how Piranha's concept artist is bring the old designs smack up to date. If you look at the original it's a very flimsy looking thing that when viewed with a modern eye... well it just doesn't seem even vaguely feasible.

Thanks to Sarna.net for the classic old image btw.
Whereas the new version is much more convincing. Fleshed out, chunkier and just a whole lot meaner looking, this new Centurion looks like a proper war machine that might actually be able to take some punishment. 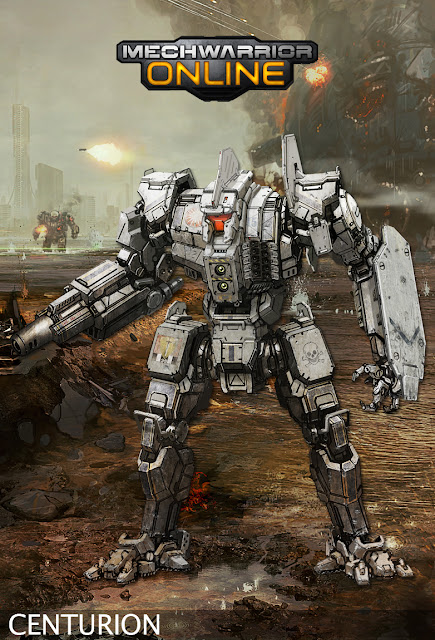 That's the thing with bringing battletech designs up to date, the old stuff just looks so flimsy. This of course is not helped by the concept of walking tanks in itself being ridiculous, certainly for bipedal ones. Weapon impacts, kinetic energy and gravity don't lend themselves well to the idea, but then it is make believe. ;) As mechwarrior has a gritter, more "real world" feel than most mecha-style-gundam-cock, I imagine it's quite a challenge for an artist to make it look cool but not leave the common-sense side of your brain screaming DUMBTARDED!

So far I think Piranha are doing a cracking job. Everything is sounding promising for MWO, early days of course, but I do like what I am seeing.