Many careers in WAR have been on a bit of a roller coaster ride since launch. They plummet into the foul depths of nerfdom, rocket skywards to bask in the light of an overpowered sun, only to go down faster than a skint chavette.

Right now with my Chosen I’m in sight of that overpowered sun, not quite getting a healthy tan, but I’m certainly catching enough rays to be very comfortable. I don’t think we’re overpowered yet, personal bias perhaps, but I honestly don’t think so. For me it’s more a case of paper scissors stone; Chosen are a stone and some people playing scissors seem to think that they should cut up everything easily... That and how the good players stand out and the bad ones are forgotten, with a class as popular as Chosen (they look awesome) there are plenty of good players to remember and the mass of crap ones (that’s you Mr Ravage Spammer) just meld into the nameless zerg. It’s when you fear the name of infamously bad players that you’ve got to start worrying about their career. That said, I won’t argue against those saying that a well geared and played Chosen is one of the better careers in WAR right now. However, it wasn’t always like this. 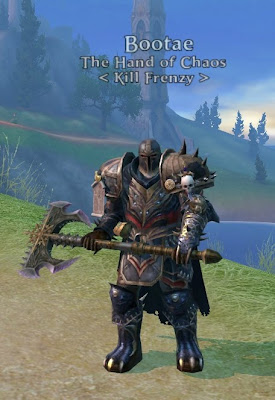 At launch we were excellent RvR Sword & Board tanks, but very poor with great weapons. Then we got nerfed in all manner of ways and combined with (at that point) many bugs, we became known as the worst tank in the game. Things changed over time and with the infamous Rending Blade buff we became overpowered killing machines. We were absolute bloody monsters for a month or two. Then it was Rending Blade’s turn to be nerfed. At the time it was a change I thought killed the spec, but to Mythic’s credit it wasn’t that long before I realised it was a sensible nerf and ate my words. Which roughly leads us to today’s Chosen. As mentioned above, with good gear, a decent spec and a good player, the Chosen is very influential on the battlefield. We can solo well, provide a wide range of group buffs and can contribute very well to both large and small scale RvR. Thing is, we should enjoy it while it lasts, because at some point the nerfbat will come swinging our way again.


Every career is on a roller coaster, but not everyone has a dramatic ride. You’d think that Bright Wizards, Warrior Priests, Sorcerers and Disciples of Khaine would be getting bored looking down at everyone by now. As far as I’m aware they’ve never been anywhere close to average, let alone sub-par. Where as many Marauders, Blackguard, Shadow Warriors and particularly Magus have already got off and strapped themselves into a new ride. Though experience tells us that what goes around, comes around. If you’re riding high, you need to be ready to fall. Look at Ironbreakers for example, still a solid class, but nothing like the invincible death machines they once were.

Every MMO I’ve played has taken us on it’s version of the nerf/buff roller coaster. From Ultima Online onwards (TankMage or MageTamer anyone?) it’s always been the same. I still have nightmares about Enchanters in DAoC... I suppose when you think about how every MMO seems to have this, perhaps its understandable that a game like WAR is not going to break the mould anytime soon. With so many careers and the focus on PvP combat, career balancing is not a job I’d fancy.


Plus we, as players, are so often blinded by the shortcomings of our own character, would we recognise a balanced game if we found one? We’d probably just whinge that everything’s too samey.
Posted by Bootae at 18:10