Not a lotta choppin and does the new AoE of doom cause the lag?

Not had that much spare time last few days due to a mixture of real life stuff and having the damned pox. Which has resulted in not much progress with my Choppa. What little time I have had online when not on my Chosen I've just used to grind out quests with Gashface.

Doing a chapter at a time in each 3 pairings, seems to work quite efficiently. So far I'm up to level 24 with very little time put in since I left tier 2. Though obviously this has meant bugger all renown gains, my renown rank is lagging behind at 21. 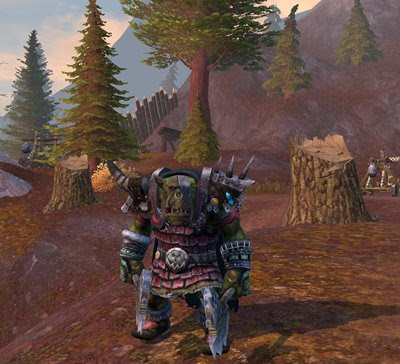 Maybe I'll get stuck into tier 3 RvR a bit more when I get more time, but it's kinda tempting to just hammer straight through and get into tier 4.
Though with the way tier 4 is at the moment, I'm not so sure I'd be wanting to use an undergeared alt in RvR there. If my pretty well geared Chosen can die in literally 1 second with the AoE spam of Doom, it doesn't bode well for a squishy choppa :P No joke, had this at a recent fortress attempt, walked anywhere near the gate it was instant death with just a wall of numbers filling my screen. Dunno how many Bright Wizards they had stacking rain of fire, but ouch... Same would happen to Order when our Sorcerers stacked pit of shades I guess. Literally impossible for healers to do anything, especially when combined with the horrific lag. Hopefully it'll get fixed soon.
Interestingly that night we noticed that soon as we managed to get the Order off the walls and the Rain of Fire spam stopped for a bit, instantly the lag got better. Like a LOT better. I had spell effects turned off, so RoF shouldn't effect my PC graphic wise and everyone in alliance chat was talking about the lag reducing. So it wasn't just me.
Is it the calculations AoE makes the game do or something that shafts the server performance? There's a link for sure it would seem.
Posted by Bootae at 23:48