TLDR version - It's very good and much more interesting than the other uninspiring game you are probably playing.

If you’ve seen any of my related tweets then you’ll already know that I’m a fan and have been more than a little impressed by Planetside 2. It has been spectacularly good fun, though that’s not to say it will suit everyone. This is an MMOFPS, not so much an MMORPG (though that can be debated) and there is no PvE at all. Like traditional online FPS games, Planetside 2 is decent when playing solo, but comes alive when played in a group. However thanks to Planetside 2’s campaign system, 3 factions and huge scale, when coordinating with the players on your faction the game comes alive in a monstrously awesome way.. Being a PvP based MMO, that may have seemed like a rather obvious thing to say, but the reality of MMOs is not everyone plays with other people and some folks do treat these games like a single player one with a chat room. With Planetside 2 if you were to dip in to it purely from a solo perspective, then it’s likely to feel a bit harsh, certainly chaotic and much of the awesome is likely to be missed. The ebb and flow of Planetside 2’s campaign and any strategy or tactics being employed will be invisible if people just hit instant action, look for red names to shoot, don’t get involved and never actually work with their allies.

However, the first time you join up with other players for a defence or a coordinated attack on an enemy held facility… Oh my. It’s spectacular and one of my all time favourite PvP MMO experiences. I’ll talk about the campaign, classes, combat, etc another time, because for now I wanted to give you an example of what it actually feels like to play Planetside 2 when you properly take part in groups and cooperate with your allied players. What follows is a (badly written) retelling of a rumble we started not so long ago. 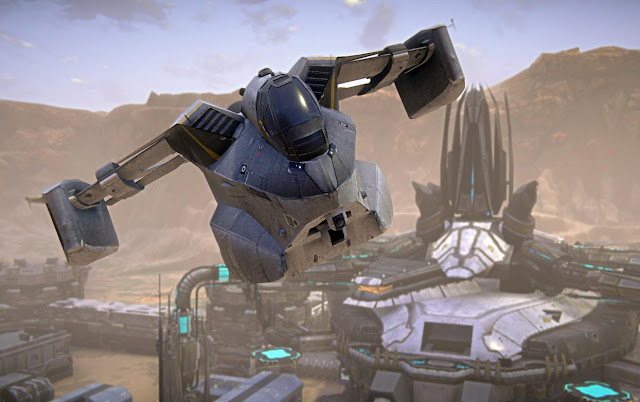 Logging in with my Vanu character, I spawned at the main Vanu warpgate and joined a group of players who were setting up with a Galaxy transport (large troop carrying VTOL aircraft) to attack a Terran held base (I forget which, sorry). The gunner positions were already taken and as such I would be a passenger for this trip, but from the chat it seemed like we had an organised bunch of chaps running the show, so I was hopeful for some fun. Shortly after, the Galaxy was fully loaded and we set off. It’s VTOL engines roaring to life as the Galaxy lurched upwards, made a smooth banking turn and accelerated in the direction of our target enemy facility. Looking around outside I noticed a couple of Scythe interceptors sweep in to formation alongside us, apparently providing a prearranged escort… Needless to say, this looked proper classy. I equipped my Pimp Hat of Atmospheric Awesomness+2.

It was a tense yet fairly uneventful journey, our gunners and escorts only had to deal with one or two enemy aircraft and within a few minutes our target was in sight.  As we reached the enemy territory things started to get a bit trickier. The Galaxy was taking damage, mainly from AA below us. For a moment it was looking pretty damn dodgy and I was worried I’d be a helpless passenger plummeting to a fiery death in a blazing Galaxy. Thankfully the fighter escorts managed to draw enough attention to allow our pilot to make it down and land safely on the edge of the enemy base. It was a pretty defensible position he’d nabbed, there was practically no way enemy vehicles could get to us and there was a mountain to our rear providing some natural cover from being flanked. We all disembarked and started moving in to clear the enemy buildings. Meanwhile the Galaxy was deployed as a spawn point to give us a forward base for changing equipment and for our (inevitable) casualties to respawn . The Terrans were actively defending and we had a proper infantry battle on our hands, gunfire coming from defenders in multiple directions. There was much  pewing, THWAPOWS! and so on. Initially we pushed the Terrans back a decent way from the Galaxy and for a few moments it looked like it might be over quick, but this was one rapidly escalating engagement. Not only did more and more Vanu spawn at the Galaxy, but absolutely shit loads of Terrans arrived to defend their facility.

It went bat shit crazy. There were lines of Vanu all over the place firing up at the Terrans who were in turn lined along the building’s roofs and windows returning fire. It was a charnel house of pixel death and it went on for ages with both sides going back and forth, gaining and losing ground. I don’t know the numbers, but this was a seriously large scrap and in bloody close quarters. And it just kept getting bigger. Other Galaxies came swooping down and deployed troops into the fight, a couple of them also squeezed in to deploy as spawns. The Terran numbers kept increasing and I was cackling with glee as it got more and more insane. It’s hard to explain quite how awesome that fight was. There was just so much atmosphere to it. Using the localised voice chat you’d hear players calling for medics or ammo, shouting warnings, calling for fire to be put down on this or that building, yelling about being flanked and so on. The air was full of tracer fire and explosions, and everything was… loud.

And then it went a whole other level of big bada boom. As night started to fall the Terrans decided enough was enough and a whole bloody squadron of Liberators (each a 3 crew bomber) was sent in to clear us out. We discovered this the hard way from; “BOOM! BOOM! BOOM! BOOM! BOOM! BOOM! BOOM!” Explosions everywhere… lots of dead Vanu. Ouch. The Terran infantry pushed forward, our Galaxy spawns got destroyed and suddenly our attack was decimated. I respawned at an outpost we’d captured nearby and ran back with my team, but then as we crested a hillside overlooking the Terran facility we skidded to a halt, stood still and watched, genuinely open-mouthed. Someone in chat summed it up with 4 letters. OMFG. All the Liberators (numbers = lots…) were hovering over the facility and spam bombing everything to buggery. Spam bombing… at night time for extra dramatic lighting effects, resulting in a fireworks display I’ve not seen the likes of since Apocalypse Now. It was incredible to watch and a classic gaming memory. 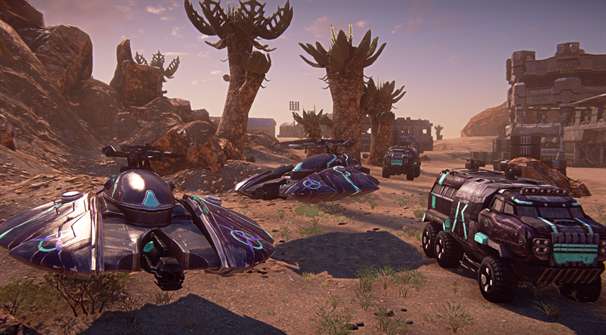 But it didn’t end there. The Vanu weren’t going to take this shit, oh no. The infamous Vanu Magrider Army (and friends) turned up. The Magrider is the Vanu’s main battle tank, it has 2 crew and looks very much like the 40k Eldar Falcon grav tank. I can’t speak for other servers, but on mine you’ll often see the Vanu using them in seriously large numbers. Double figures of Magriders, supported by Lightning tanks and Sunderer transports, all streaming towards the Terrans. Which would have been easy prey for the Liberators if it wasn’t for the Scythe interceptors streaking across the sky to attack the slow, clumsy Liberator bombers. Planes were falling out of the sky, tanks were laying the smack down, infantry were running between it all and shit was blowing up everywhere.

And then the New Conglomerate arrived, in heavy tanks and Sunderer troop transports. Lots of them. As Harold Bishop would say “ah…”. So we now had a complicated and bloody massive 3 way fight. Drama! What had started with one galaxy full of 12 infantry had escalated into a massive battle with seemingly hundreds of players and the group I had joined at random was the spark that had started it all. It was a little mind blowing really, as much as pixels can be anyway.

Of course this doesn’t happen all the time nonstop and there are most certainly moments where things get a little bitty as you’re in-between more purposeful engagements, but something like the above happens most nights when I’ve played for more than a few minutes. And you don’t even have to be in one of the big raid type platoons, you just need to get involved and pay attention to what’s going on. My friend Veno and I are often grouped just the two of us crewing  a Magrider, but we still end up part of the Magrider Army and inevitably get drawn into all sorts of other situations. There’s already been so many epic tales to tell and it’s merely beta. Also it must be recognised that these kind of events can happen in any PvP orientated game, I could tell similar tales from WAR, DAoC or the old days in Ultima, but the difference with Planetside is how incredibly fluid it all is, how regular these fights are, the scale of it all, the intense visual and audio drama and how smooth the performance is throughout. My FPS stayed at around the 20-30 mark throughout all of this, even on my rather basic PC. No sign of a fortress defence Powerpoint presentation here… To be honest, how well this game performs with VAST  numbers of players and total bloody carnage should embarrass pretty much every other MMO developer, unless it’s due to melee or something beyond my ken, they are all doing it wrong. 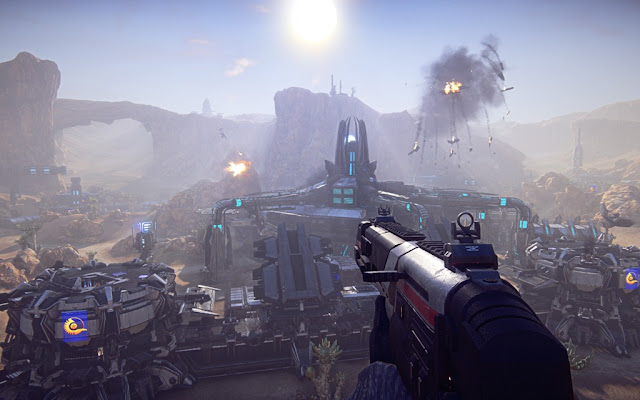 Another specific point I wanted to mention that adds to all of this is the bases themselves. They are huge, complex, involving and most importantly; relevant. The objectives you have to capture (or in some cases optionally destroy) are spread around the base and in certain rooms or areas, but there’s none of the typical MMO nonsense where most other buildings are just a box with a texture wrapped round it, instead these are buildings you will be fighting in, under and on top off. Everything and everywhere is a potential route to take, defend or hide in. This makes them much more atmospheric and entertaining to battle over. The only downside is there’s no destructible terrain, but then that would probably present too many issues in a game like this and for once I don’t mind.

So as a PvP experience, right now I would say Planetside 2 is right up there with the best. I honestly can’t fault it without being unreasonable and overly picky. That’s not to say there aren’t things I will criticise, as there are, but they’re not enough to detract from the game as an unrivalled dynamic PvP experience. OK except maybe EVE, but they’re doing such totally different things that I just don’t think you can compare the two. ;)
Posted by Bootae at 16:48