Couple of days ago I got my first experience of fighting the Colossus in Land of the Dead. In case you’re not familiar with this particular beastie, here’s the low down. When a group successfully clears all 8 bosses in Tomb of the Vulture Lord and the PQ outside is then completed again, it activates a special public quest that has excellent rewards. With a boom the giant statue outside the tomb collapses and its colossal upper torso hits the ground. The statue's crippled remains come alive and is very, very angry. The public quest is to kill it. 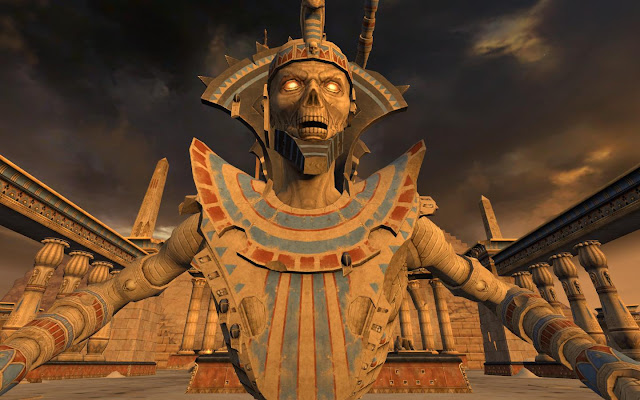 It’s quality boss fight and one that I think Mythic have got very right. The boss has a range of abilities and requires certain tactics to fight, however unlike so many boss events in MMOs, it’s arranged in such a way that you can quite quickly work out what you have to do. You probably won’t beat it first time (we didn’t anyway), but unless you are special you will at least learn the fight and be confident for the next time. It’s not even vaguely tank and spank, but there’s no need to search the interweb for obscure tactics. It really is a very well presented fight.

I’m also a big fan of it as a non-instanced, community promoting fight in an RvR enabled zone. It encourages cooperation and provides natural drama. We must have had 60-100 people there, all working together and all bloody paranoid about Order turning up. The fight itself has a 15 minute timer, so we were already a little tense, but when you add the fear of your enemy faction arriving, it really does add a wonderful extra level of tension to the event... It reminded me of the dragons in DAoC or dungeon fighting in UO’s Felucca, albeit more complex boss wise.

This style of PvE event is what I would like to see more of in WAR. There’s no need to instance everything and have us buried away in dungeons. Give us more large scale PvE bosses that feel like big events when they’re activated. Use the PQ contribution system to share out good rewards (read not like the crap on lair bosses), so these events have incentive beyond the first kill. And have them in places where we have to keep our eyes open for enemies. A healthy mix of gaming excitement and paranoia please!

And now I must temper my enthusiasm with a rant...

OI MYTHIC!
Do NOT link great events like this to bug ridden bloody dungeons, where clearing it is as much about sodding luck as anything else. I posted the other day about how my return to TotVL was cancelled by bugs, well… the other guild group that went that day ALSO had to stop because of bugs. Third boss was moving with his legs inside the floor, which meant the bomb animation was not visible. Then when they wiped because of this and ran back they found the door to the boss room was locked for half the group and open for the others, so that was the end of that.

When ToTVL came out, for the first few months Kill Frenzy was one of the guilds with the furthest progress (6 boss kills quite early) into ToTVL, but then we stopped going because the bugs were so annoying. Now that we decide it must have had enough time to get sorted out, we find the opposite. It’s very hard to motivate people to go when it’s generally seen as a waste of an evening. The bosses won’t drop Tyrant because of the ridiculous loot rules (I’ve seen 4 pieces drop ever) and it will bug and screw up everything anyway.

Honestly, I have to /salute the guys that are persevering night after night to get it cleared. I can’t log on that much anyway, but even if I could… fair play to you chaps. I’ll happily fight that Colossus though ;)
Posted by Bootae at 17:23

Labels: Land of the Dead