Over the last few days I’ve had what could perhaps be an epiphany. I’m going green.

I’ve always liked my Chosen. It looks great, has a solid feel to it and performs well. It’s a good class and I’ve had a lot of enjoyment from playing it. Only recently I was saying how the Chosen would remain my main character and my Choppa would remain just an alt. Wrecka spec was great and all, but it never really grabbed me by the short and curlies. I’m not into playing a class or spec because it’s uber or the current flavour of the month, I just want it to be at least moderately competitive, have a cool appearance and most importantly be a good laugh to play.

As I posted before, this week I hit 40 on my Choppa, but decided to respec away from path of Da’ Wrecka. Sure Da’ Wrecka is the uber Choppa spec of Doom for large scale oRvR and it’s AoE damage in PvE is immense, but I just wasn’t enjoying it enough. No disrespect meant to the VAST amount of people using it, but I was finding it a bit boring. This led to me changing to path of Da’ Hitta and since I’ve had a bit of time off work this week and few evenings free, I managed to get a lot of practice in.

I’ve had an absolute blast.

It’s been immense fun and the playstyle instantly clicked with me. I’m still learning obviously, but already I’m very competitive and had some great fights against some decent players too. It’s not that the Da’ Hitta is stupidly uber or anything, but it seems to be the perfect spec for me. I think a lot of this is because it feels very similar to an Arms spec Warrior from World of Warcraft. I played a Warrior throughout my years in WoW and most of that time I was Arms specced. I went Fury at level 70 in the Burning Crusade, not because of enjoyment, but because fury was so dramatically superior for DPS. Even so, whenever I went PvPing I would respec back to Arms.

All of which gave me a bit of a dilemma. Do I carry on with Bootae (Chosen) as my main character, or switch to Gashface full on? A tougher choice than it may seem, since I've put a lot of time, thought and effort into Bootae's progression. After much pondering and several changes of heart, I've decided to switch to Gashface. I'll still be using Bootae for PvE with my LV group and log him whenever needed in RvR of course, but for general play I'm gettin' to da Choppa. 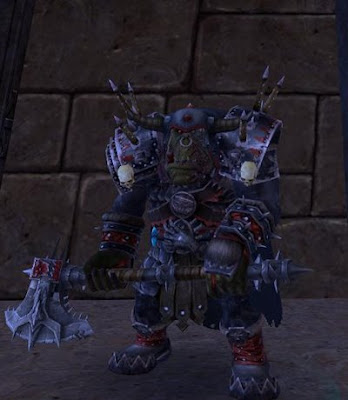